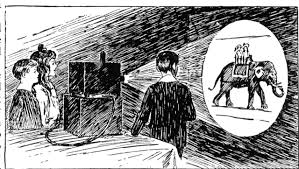 If it wasn’t for the invention of  cine film and the development of film–making our hobby would most likely not exist. 150 years ago, before cinema was ever dreamed of, people met in Church Halls and their living rooms to enjoy “Magic Lantern Shows’.

Who would have ever thought that from these small beginnings a vast film industry would have sprung up and the Magic Lantern would lead to making movies on Smartphones. 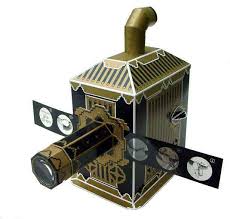 The Magic Lantern’s main drawback was that the pictures did not move. However many children at the time were playing with toys that showed moving pictures.

One of these was a Zoetrope, but this could only be viewed by a few people at a time. The search was on to try and combine the Magic Lantern and a Zoetrope to show a projected moving image to a large audience.

Without going in to a detailed history of the development of projected moving images, because there are many threads that came together to get where we are today, briefly…………..

The first flexible transparent film base was made by George Eastman in 1889, founder of Eastman Kodak. This was 35mm wide and by 1909 it was the industry standard. The early acceptance of 35mm meant that cinema spread world-wide as Films could be shown in every country in the world. Early 35mm film stock used Silver Compounds in the emulsion, which made it expensive to use, so the spread for amateur use was restricted to a few who could afford it. An attempt at making a cheaper format was made by slitting the 35mm stock in half to 17.5mm. This was first used in 1898 in places like India where the 35mm stock would have been too expensive. This was used until the end of World War 2 when 16mm and 8mm film made by Kodak took over in popularity for amateur use. By the early 1920s there were several formats for home movie makers. 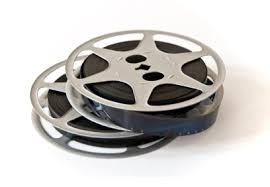 35mm film has been used in cinemas until very recently because its size allowed for a good trade off between the cost of film stock and quality of image. The advent of digital projection in cinemas means that Kodak is the only remaining manufacturer of motion picture film. 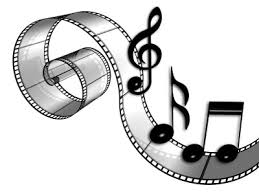 The coming of Sound

Why 24 frames per second?

Early films were, of course, silent and hand cranked with speeds varying between 14 and 26 frames per second depending on the operator. You can imagine a film cranked by one hand with photographed and then cranked by a different hand when shown. To overcome this problem, often films were delivered with instructions as to how fast, or slow each scene should be shown. Everything changed with the coming of sound. Synchronizing sound with picture was attempted as early as 1900, but the technology was too unreliable. 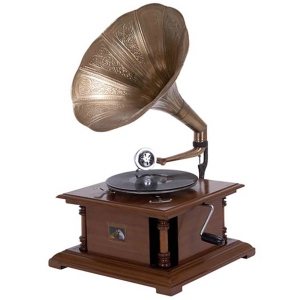 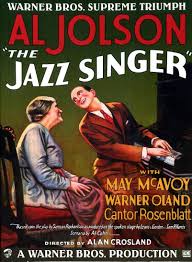 Silent film speed was an average of 16 frames per second and it was found that it wasn’t possible to produce a quality sound track at that speed. By the late 1920s it became possible to sync sound using a Phonograph (record player) and by 1927 the first real “Talkie”, with the sound track on the edge of the film, was “The Jazz Singer”

Film was expensive and it was in Hollywood’s best interest to consume as little film as possible during production. The major studios decided on 24 fps as the slowest possible for producing intelligible sound and using less film stock. So 24fps was only an Economical and Technical decision.

It was inevitable that where professionals led amateurs would follow. Between the wars only the wealthy could afford to make home movies, but amateur cine clubs started to be formed all over the country and in November 1933 the first IAC National Movie Making contest was held in London. The IAC had been founded a year earlier by George Sewell, and a few others, and this national cine competition was the culmination of their determination to form a non-profit making organization for amateur cine enthusiasts run by amateurs. 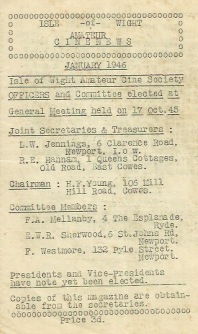 The first, and only, amateur cine society on the Island was formed on the 12th September 1945 in the committee room of the Newport Literary Society, 30 Quay Street, Newport. A month later, on the 17th October, the Officers and Committee were elected. The Chairman was H.F.Young from Cowes and joint Secretaries/Treasurers were L.W. Jennings and R.E.Hannam (the father of local radio presenter John Hannam). Other committee members consisted of local businessmen, F.A. Mellanby (Nicolson’s), E.W.R Sherwood (Sherwood Radio) and F. Westmore (Westmore Builders). Once the officers and Committee had been elected a programme of fortnightly meetings was arranged to appeal to the 23 founder members. These first meetings included, a visit to the projection room of the Medina Cinema in Newport, and a visit the Kings Cinema in East Cowes. These were arranged by one of the members, Mr D.A. Turner, who was also the manager of the Kings. Another member, F.W Beken of Cowes, gave a lecture and projected yachting films.

The first public film show by the Society was held at the Methodist Hall, Lower Pyle Street, Newport on Wednesday 27th March 1946. Admission was 2d with all proceeds for the Royal I.W. County Hospital Centenary Fund.

The Isle of Wight Amateur Cine Society’s first club film made in 1945,

shown at public shows to advertise the club.

The following films were also shown

‘Cement’ by H.A.Burnford, ‘Switzerland’ by S.R.May, ‘The V-Ray Tube’ from Stoke Amateur Cine Society, ‘Chessington Zoo’ loaned by Southern Railway, ‘Island Scenes’ by W.L.C.Baker, ‘Shots in the East Wight’ by F.A.Mellanby and ‘Newport Carnival’ by the Rev W.H.MacKinnon.

Whilst most of these films have long since faded to dust, some of them have been preserved.

‘Cement’ is stored at the East Anglian Film Archive and can be viewed on their website.

‘Shots in the East Wight’ can be viewed on our Cinema page.

Although the Newport Carnival film by Rev W.H.MacKinnon no longer exists another film by him has survived,

In 1955 the club had to find new premises for their meetings due to the closure of the Newport Literary Society building. This proved an ideal opportunity to find bigger premises as the membership had grown to over 50, with film nights sometimes having an attendance of nearly 100. It was decided to hold weekly meetings and split into two groups, film nights and practical evenings. Practical Evenings would be held at the Unitarian Hall, Newport on alternate Mondays and Film Nights would be held at Nine Acres School, Newport on alternate Tuesdays.

The 1960s and 70s were the heyday of Cine Clubs and the Isle of Wight Amateur Cine Society flourished. The film nights continued to attract large audiences as films were in colour and most people still only had black and white televisions in their homes. 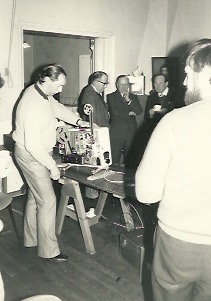 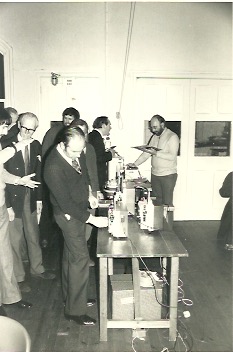 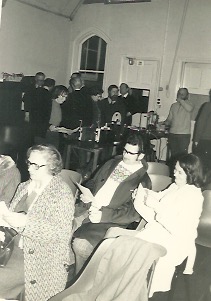 As the 80s approached, with the arrival of the VHS video tape recorder and colour television, film night numbers decreased. At the same time Nine Acres School increased the rent for use of their school hall, so the club decided to move all meetings to Monday nights at the Unitarian Hall. Club nights became more practical and a club film “Café Capers” was made. In an effort to attract new members a leaflet was produced for display in local libraries.

“The action takes place in a rather scruffy café ran by Joe and, when sober, his wife Jane. 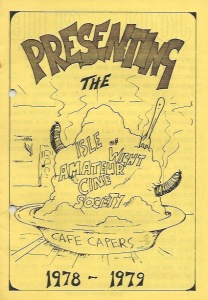 Bill and Tom – Domino Players, with Bill a devious winner.

Man and Dog – Dog likes sugar in his tea (three).

Granny Smith – Always talking (to herself).

The regular pattern of the café is interrupted when Fred the joker arrives with his three unsuspecting victims, who thought they were going to a posh restaurant, but ended up here. Now things start happening.”

Amateur Cine Society” to the “Isle of Wight Cine Club”. Members felt this might encourage a new generation to join, as the word Amateur at the time was being used as a derogatory term.

on the 28th September at the Apollo Theatre, Newport.  This all day event featured an Open Film Competition for cine film makes from all over the world with the winning film receiving a wooden trophy carved by local craftsman Jack Whitehead. A full programme was planned for the day with Lew Cooper showing animated films and Dave West of DCR selling package movies. Robert Stacey entertained at the organ and the highlight of the day was “An Evening of Nostalgia” , with films of local interest presented by John Huntley.

This first show proved to be an almost embarrassing success, being staged at Newport’s Apollo Theatre and introduced by the celebrated presenter of Archive programmes, John Huntley. This was the start of a series of memorable shows presented by the club under the title of “An Evening of Nostalgia” and John Huntley went on to present all 33 of the succeeding shows. The second show, and all that followed were presented at the much larger Medina Theatre on the outskirts of Newport, the 420 seat capacity becoming very necessary. Following shows included various themes and resulted in the Cine Club recruiting many new members. 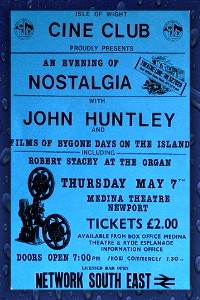 These new members though, were not interested in using cine to make their movies, but wanted to know how to use the new video cameras that were appearing on the market. Initially the club embraced them and even made another change of name to the “Isle of Wight Cine and Video Club”. But then a few problems became apparent, videos could not be shown at the club without a television (this was the days before LCD or video projectors) and the quality of the picture compared with cine was atrocious (in the view of some cine members). Editing was another area of contention and required a whole new learning curve for those entrenched in cine.

The Club tried to accommodate those that were interested in video but by the end of the 80s a splinter group had formed, and Cine and Video parted ways. A few members of the club who were interested in video decided to start another club solely for video camera users, and in 1989 the Isle of Wight Video Camera Club was formed. Their first meetings were held at the Newport Victoria Sports and Social Club, Victoria Recreation Ground, Newport. Before long, membership of this new club had outgrown these premises and a move was made to Wootton.

Meanwhile the Cine Club members (despite the lack of new cine equipment coming onto the market and the shortage of filmstock) were determined to keep going. Open evenings were held and Public Film shows presented, but to no avail. Older members no longer attended meetings and younger blood were more interested in the possibilities of making films, with picture and sound 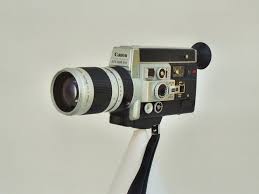 synced together, that the new video cameras offered.

The membership slowly decreased and by 1999 only three members kept the cine flag flying. These stalwarts still had weekly meetings, but now at each others homes. With what little film stock they could obtain the next few years were spent making short animated films. By 2010 the Isle of Wight Cine Club had faded from memory.